I have a Cinterion® ELS61-E2 ****m which has been configured to attach to a LTE network. The SIM card has a custom applet installed that I am trying to communicate with using custom APDU messages but I am having difficulties so am hoping that someone will be able to offer some advice please.

When I first power on the ****m I can send an AT+CSIM command to select my custom applet which responds with success 0x9000 and then immediately send a second AT+CSIM command to query some data pre-loaded to the custom applet and the data is returned as expected (this si done as soon as the ****m says PBREADY). If I then try to repeat the 2 AT+CSIM commands a few seconds later (I'm think that the ****m has attached to the LTE network at this point) neither of them return any data but the AT commands still report "OK".

If I delay sending the initial select command until a few minutes after the ****m has booted - it will usually report success (0x9000) but then when I send the second AT+CSIM sommand to query the data in the applet I get no response from my applet but the AT command still reports "OK".

Output from the above scenario is provided below. 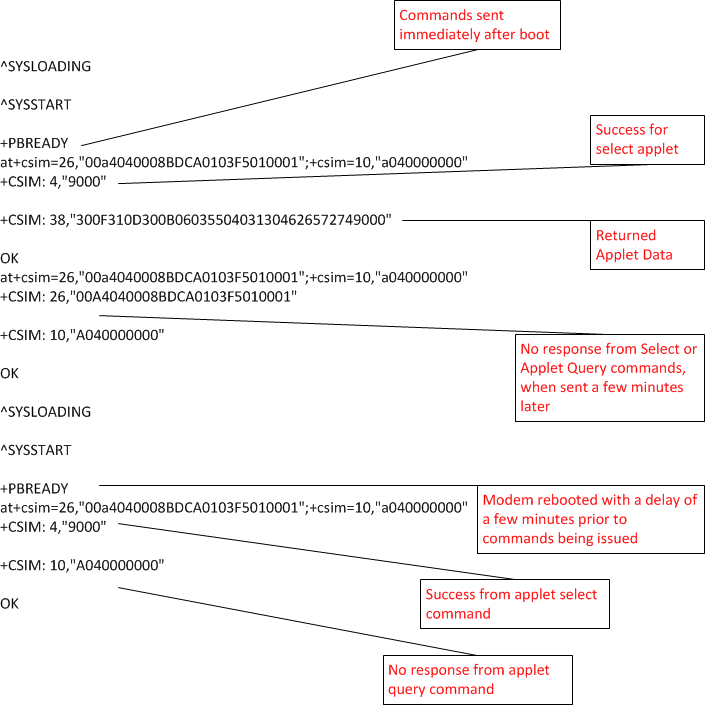 Thanks in advance for any suggestions

I've also learned a little bit more about the communication with USIM applications.

I think that you should communicate with your applet on a dedicated logical channel, not on the default channel 0.

When you select your applet on standard channel 0 it may break the module's communication with the standard USIM app.

Please try to open a new channel first like in the example below (in this example it's channel 01):

Then select your applet:

and send your command:

When the communication is finished, close the channel:

As for your applet code I work with modules only and don't have environment to load an applet to USIM card. It wouldn't be that easy for me.

This has resolved the issue.

Many thanks for your expertise and assistance, this is very much appreciated.

I'm glad that it has helped.